Tattoos have become mainstream art in our society. People from all walks of life are choosing to decorate their bodies with colorful ink and displaying their creative personal masterpiece.

Law enforcement culture has always been conservative. Changes in society norms are often dismissed or ignored until someone with influence within the department speaks up that “the emperor has no clothes” for the department to move.

The perception of police leadership is that a clean-cut “All-American” officers responding to calls for service sets the tone. The reality is that citizens want to interact with officers who can treat people with the dignity and respect and humanize the interaction and in today’s society when an officer is sporting a visible “tat” he/she seems more approachable and down to earth. Police culture stereotypes just like the rest of society sizes up people by the appearance and first impression. This is normal and part of any survival instinct to notice red flags and that is why we get uncomfortable at times, it is an evolutionary survival instinct.

Police administrators get extremely uncomfortable with change, especially when it comes to public image of their officers. This is understandable; however, we are focusing on the wrong things that create public police image in today’s society.

Just the other day, I watched a young uniformed officer with a full sleeve colorful tattoo talking with four citizens around the officer’s age at the local outdoor mall here in Arizona. All of the citizens talking with the officer also had colorful full sleeve tattoos. As a criminal justice professor, I took the opportunity to just observe the interaction and learn. The citizens and officer were talking about their tats, their favorite artist, and even the meaning behind their “tats”. My observations were the group was bonding over common interest of tats. I watched each of the citizens shake the officers’ hand when they left and as the group of citizens walked passed me they were talking and one stated: “I wish all officers were that cool.” It was nice to watch positive interaction in the community with my local officer and random citizens who were shopping. It was obvious to me the random interaction had an effect on how the citizens felt about that particular officer, and from what I observed it was great connection and excellent community relationship on the part of the officer.

Something as simple as a tat, made the officer seem approachable and friendly. I am sure that the officers’ personality and duty of service was the main ingredient for this positive interaction I witnessed and that the “tat” was just the trigger for the citizens to approach the officer and have a friendly chat. 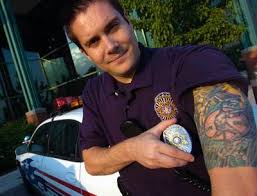 Each department needs to create a tattoo and body piercing policy that is compatible to the agencies jurisdictional mission and the citizens they serve.

What works in one agency, might not work in another.

Mark Bond has worked in law enforcement and has been a firearms instructor for more than 29 years. His law enforcement experience includes the military, local, state and federal levels as a police officer and criminal investigator. Mark obtained a BS and MS in criminal justice, and M.Ed in educational leadership with Summa Cum Laude honors. As a lifelong learner, he is currently pursuing a doctoral degree in education (EdD) with a concentration in college teaching and learning. Mark is currently an assistant professor of criminal justice at a university and adjunct professor of administration of justice studies at a community college.