Many occupations have government regulated work hours such as we find in the transportation industry. The reason for this oversight is that accidents within the transportation industry have led to legislative efforts to regulate safety and manage work hours of operators. Many of the contributing factors discovered during the accident investigations was operator fatigue. Sleep deprivation can have the same effects as being under the influence of alcohol or drugs (Senjo, 2011).

Why then do we allow police officers to work fatigued when the studies show that officers working fatigued causes diminished capacity to reason and function (Senjo, 2011)? Police officers are the most visible sign of government given the authority and responsibility to enforce laws with powers of arrest. Who is protecting the officers and who is placing officers in the position to work fatigued?

With this tremendous responsibility and accountability we expect from our police officers, why then have government officials not used their legislative powers to raise police officer salaries to a level in which they are not forced to work second jobs (moonlighting) reducing officer fatigue? With recent nationally news media coverage questioning and second guessing police officer actions and decision-making, where is the accountability for creating a working environment that forces officer to work fatigued?

Over half of the police officers working in the United States are expected to make less than $52,374 annually according to Salary.com figures. Not many other hazardous professions salaries pay less than $52,000 a year with public scrutiny and legal accountability. Why has federal and local government officials not addressed the police salary problems if they truly want to see meaningful and sustainable change? Once the police salary issues are resolved can we address the legislative piece that is causing the police fatigue crisis. 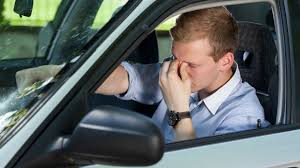 Bold law enforcement legislation needs introducing to force police administrators to monitor working duty hours in compliance with the new laws that set hours of service a police officer can work before a mandatory required amount of rest time.

It is not only long duty hours and part-time outside work that is the cause of officer fatigue. Some of the reasons is the nature of criminal justice system that requires officers to attend court and testify on their cases. Working the midnight shift and attending court all day is exhausting. The Senjo (2011) study found evidence that officers working the midnight shift were constantly fatigued with disruption of the circadian rhythm that affects many cognitive functions. We expect police officers to make critical split second decisions, yet the current working conditions cause extreme fatigue. Legislation must address the amount of time an officer works consecutively with mandatory rest time from the end of the shift before allowed to go back on duty.

Forcing change on a police culture engrained with the tradition and expectation that working part-time employment and extended duty hours goes with the job is not going to be easy. Change is never easy, especially in a sheepdog warrior culture that measures character and loyalty by the amount of time an officer spends working on the job.

The recommended needed change in current police working practices comes with a price tag; however, no realistic police change is going to occur unless federally funded properly. Politicians and the public are demanding police change after recent national events involving alleged police misconduct; however, no one wants to fund the change everyone is demanding. The financial reality is you cannot make the needed changes unless you address low police salaries, increase department manpower to alleviate officers working longer, and supply our law enforcement agencies with modern equipment and tools to serve the community efficiently.

How can federal government officials argue we do not have the funds to make the required changes, when we give billions of U.S. taxpayer dollars in foreign aid each year going to other countries security and protection? Yet our federal government lacks the moral courage to fund local police agencies to a level that is safe and provides well-rested officers capable of cognitively making good decisions.

Have you ever stopped to think that the officer was fatigued and made a bad decision because their cognitive skills were impaired? This is not a justification for any officer behavior; however, the evidence shows that fatigue diminishes the ability of cognitive skills needed to make quick reasonable choices (Senjo, 2011).

The question we must ask ourselves, do we really want the social justice change that addresses one of the major issues that causes poor cognitive decision-making by our police officers.