The term “rape culture” was first introduced in American society in the 1970s by feminist in an effort to raise awareness and educate the public on problems associated with sexual violence towards women.

The World Health Organization (WHO) reported that 1 in 3 women are victims of sexual violence. RAINN (Rape, Abuse & Incest National Network) indicated that 600 people are raped in the United States per day. RAINN also reported that only 40% of rapes are reported to law enforcement authorities. This data indicates that rape and sexual violence is a problem in American society. 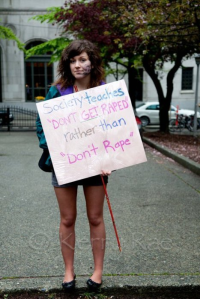 Just this year, the media reported the story of Stanford University freshmen swimmer Brock Turner who was convicted of sexually assaulting a 23-year old female student. The sentence for this sexual assault conviction was a six-month jail sentence. Americans were outraged at the short length of sentence given to Turner for his sexual criminal conduct. Sexual assault is not an accident caused by college students abusing alcohol beverages as Turner’s defense team argued and the judge accepted.

It was not until the media shared the victim’s impact statement written by Turner’s victim to the judge that was read by millions of Americans, that we understood the trauma and emotional pain associated with sexual crime victims. This brave young lady is a surveyor who allowed her story to be shared so that no other victim of sexual assault would feel alone. This brave young lady words became our mothers, sisters, wives, girlfriends, and daughters. Her statement was powerful and gave a voice to sexual assault victims.

Currently, in the 2016 American political elections, the topics of sexual harassment, enabling, rape, sexual assault, blaming the victim, and sexual exploitation of women have been the main focus of the media and the candidates past behaviors.

How can we move the dialog to action to educate, prevention, and reduce the number of rapes and sexual assaults occurring in the United States?