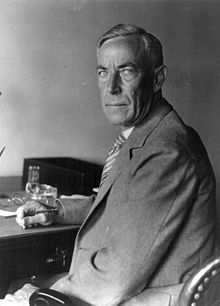 The person who championed American criminal justice studies into a formal academic discipline is August Vollmer, the first Police Chief of the Berkeley Police Department in California.

In 1916, with the experience and knowledge learned from modernizing the Berkeley Police Department, August Vollmer petitioned the University of California at Berkeley with a revolutionary idea to approach the profession of law enforcement through academic research and study. The University of California at Berkeley embraced the proposal from August Vollmer and the first formal criminal justice academic degree program became available to students.

The new academic program’s primary focus was on professionalizing policing in America in an effort to stamp out corruption and establish organized protocols for patrol procedures and detectives. The first courses in the new program were police functions and were vocational in nature rather than traditional academic studies.

The program quickly evolved into a respected rigorous academic program as new concepts and protocols were researched, analyzed, tested and evaluated. Today, within the criminal justice discipline, August Vollmer is affectionately recognized as the “Father of Law Enforcement” for his dedication to pioneering police studies into the criminal justice discipline we know today.

The transformation from vocational to academic track was official. Criminal justice studies in American universities and colleges today can give credit to these pioneering universities for leading the way with their early police science curriculum.

Another notable reason for the popularity of criminal justice studies is the advancement in distance education opportunities. Distance education flexibility is attractive to new college students as well as busy seasoned law enforcement professionals who need to stay abreast on the latest research studies and trends within the profession and discipline.

In speaking with other criminal justice educators, I find they are passionate about their students and have a very strong foundation in the discipline as a result of nearly a century of academic excellence. From the beginning of criminal justice studies, one tradition has remained the same and continues today from the legacy left by the “Father of Law Enforcement,” August Vollmer:

After all, these professors and students will be the ones generating the research that guides policymakers and helps them to make informed decisions that will continue to advance the professionalism and efficiency of the criminal justice system of tomorrow.